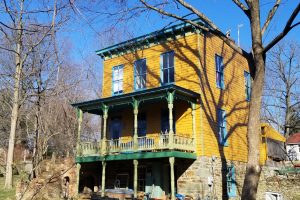 The rescue of a distinctive historic home in Bolivar has been recognized with an Excellence in Preservation Award by the Harpers Ferry – Bolivar Historic Town Foundation. The annual award highlights the work of Pam Leonard and John Flower for their contribution to maintaining and enhancing the architectural, historical, and cultural heritage of our community. Their preservation of the long-neglected house at 21 Downing Street has saved it from further deterioration and is bringing the property back to life.

When Pam and John purchased the property in 2020, the house had been unoccupied for several years and was barely visible from Washington Street through the front yard’s jungle-like overgrowth. The couple both are history lovers, and as they gradually clean up and DIY repairs with the help of a friend, they have been thrilled to discover some of the home’s secrets.

The top two stories of the house present as a rare, flat-roofed Italianate-style home in the Harpers Ferry – Bolivar communities. It features wide, overhanging eaves with evenly spaced scrollwork cornice brackets across the front. On first glance, the eye takes in a two-story house perched on a high stone foundation with a Victorian-era front porch, framed in spindle work and gingerbread trim.

A closer look reveals that some frugal, 19th-century home builder chose to expand their original holdings by placing the wooden structure over a much earlier dwelling – actually, two dwellings. What looks like merely a stone foundation, Pam and John now realize, is a one- or two-room, mostly above-ground dwelling in the front and a smaller, one-room dwelling behind, built into the hillside. Separating the two is an open-air cooking fireplace (covered by prior owners) and a small courtyard.

While Pam has not yet had time to do as much historical research as she would like, the stone structures appear to be antebellum, dating from at least the early 1800s. This estimate comports with deed records showing that a woman named Susanah Downey obtained the property around that time and owned it until it went to her heirs in 1884.  (The street running down the east side of the property now called “Downing” Street was referred to in deeds as late as 1937 as Downey Street.) 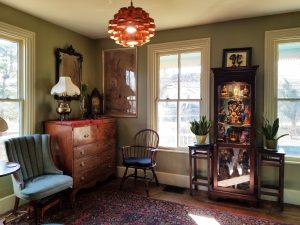 The house has good bones despite its dilapidated appearance when they purchased it. Working as they have time, Pam and John have noticeably improved the property, clearing overgrowth, painting, rebuilding the greenhouse out back (which was added by the previous owner), improving drainage around the house, and repairing cracked plaster inside.  Much is left to do, and their goal is to preserve the house and honor its age. While they may eventually construct a period-sensitive addition, Pam shudders at the modern trend of taking down walls for more open spaces.

Home preservation is still a part-time project for them until John retires in a few years. He holds a Ph.D. from the University of Virginia, specializing in the History of Modern China, and currently leads the Chinese Studies Program at the Sidwell Friends School in Arlington. Pam holds a Ph.D. from the University of Cambridge, her studies also focused on China, but her degree is in Anthropology.  She serves as CEO of a non-profit project they founded together, called the China Folk House Retreat. It is located at the Friends Wilderness Center in Jefferson County, along the Shenandoah River.

The Foundation presented its 2022 Excellence in Preservation Award to Pam and John at its annual meeting on April 19, via Zoom videoconferencing.