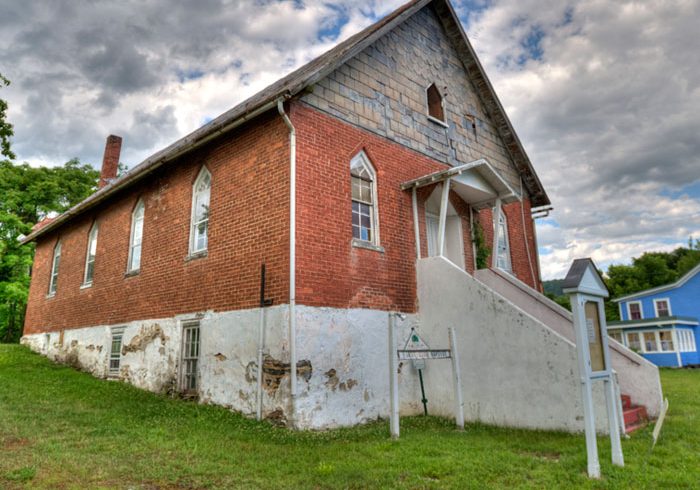 One of the Foundation’s key projects is to revitalize the First Zion Baptist Church. Built in 1894 in a predominantly African-American neighborhood, the church was a central meeting place for the local black community that developed alongside Storer College (1867-1955).

We have some incredibly exciting news to share: The West Virginia Division of Culture and History awarded a $42,700 Historic Revitalization grant to the Foundation on October 19 for a new roof and guttering on the church. The grant is funded by the National Park Service will be administered by the State Historic Preservation Office. Additionally, the Corporation of Harpers Ferry contributed $10,000 to the restoration project from hotel occupancy taxes and we received $1,700 from the estate of Sidney Schmidt, brother of Su Schmidt. A new roof is critical to our preservation efforts and will allow us to move quickly forward with other planned renovations.

On June 7, the Foundation awarded the roofing project to Leroy Beiler of Peaceful Valley Construction, Shanks, WV, with the Bank of Charles Town providing construction financing. We are looking forward to work commencing in the latter half of June. The Foundation’s project coordinator is architect Joe Bosco with grant monitoring by the Mills Group in Morgantown.

You can check out pictures of First Zion here.

Restoring First Zion is an important project for the Foundation, but it’s also important to our community. The church is central to Harpers Ferry celebrating its African-American and civil rights history and we hope it becomes a gathering space for locals and visitors alike.

In Memory of a Special Teacher