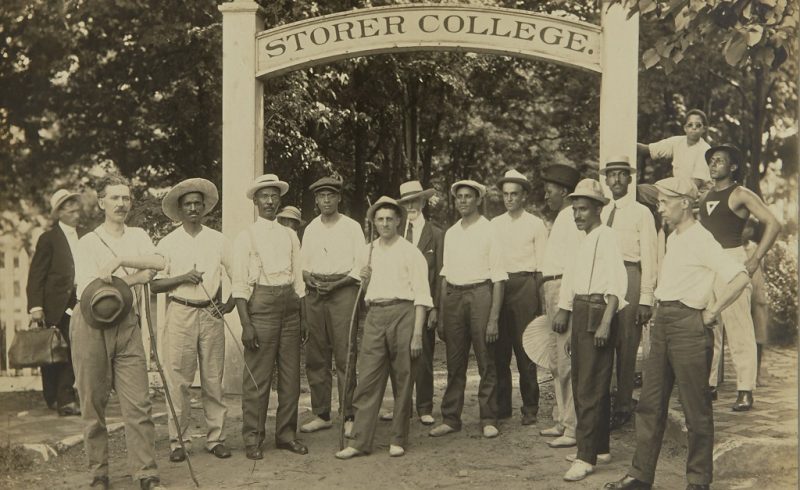 On September 11, the Foundation will host a walking tour that focuses on the diverse African American community that was concentrated along Fillmore and Washington Streets and in the West Ridge neighborhood from the late 19th through the mid-20th centuries. Proceeds from ticket sales will support the restoration of the historic First Zion Baptist Church. Click here to find out more information about this event and register.

While the walking tour has been a Foundation project for some time, Board Member Maria Beckman put in the time and dedication to get it across the finish line.

How did you conduct your research? How did your efforts build on the work of other Foundation members?

I did not originate the idea. The Foundation had been working on a Black Heritage Walking Tour for years. When I joined the Foundation’s board, I researched the lives of African Americans who were interred at the Cedar Hill Cemetery and whose grave markers were in need of repair so that we could share their stories in the Foundation’s Cemetery Walk. Doing this work, I learned about the amazing Mary Toler who first studied at and then spent much of her life working at Storer College. I discovered that she was able to build a home on Fillmore Street, and that the home is still there. I felt Ms. Toler and her story was an important part of the history of our town and should be remembered. So, I volunteered to lead the Foundation’s efforts to complete the walking tour.

Foundation Board Members Deborah McGee and Don Burgess (former member) provided me with earlier versions of the walking guide and with other research material including a history of First Zion Baptist Church and article about the history of Storer College. Don had photographed nearly every home on our tour, identified their owners, and gathered information about their lives. Deb drafted some of the narrative of the areas included on the tour. I am certain that other past Foundation Board Members also contributed to the information contained in the previous drafts. I then revised and added to the research and narratives by drawing on sources such as census data, historical newspapers, court records, Jefferson County Historical Society materials, and, most importantly, by talking with residents about their own family histories and the histories of their own homes. I left letters at the doors of almost every home on the tour explaining what we were planning including a draft of what we had planned to say about the home’s history, and asked for input. Community members generously shared their special knowledge. We wanted to do everything we could to make sure what we were saying was accurate. This is also why the tour guide asks for comments. We anticipate having to update

the guide if we have made an error or neglected to include an important story. This tour guide was truly a community effort.

What is your favorite stop on the walking tour and why?

That is a difficult question. So many amazing people have lived in Harpers Ferry, and we are so fortunate that so many of their homes remain. So many in fact, that we just could not include every one on the tour. One of the Foundation’s long-term goals is to produce a booklet that includes the story of every historic home in both Harpers Ferry and Bolivar, not only about the African American families who lived in the homes, but also about each home’s connection to other long-time community members, the U.S. Armory, the U.S. Civil War, and other historical events. That said, I have three favorite stops: (1) The Mary Toler House (stop #18), (2) the Marcia Blue Weaver- Lovett House (stop #6) and (3) The George Weaver House (stop #20). I love looking at the Weaver-Lovett House because it reflects the determined strength and fortitude of Marcia Blue Weaver who just exploded out of the bonds that held her in slavery to be a matriarch of a family who was so important to both the educational and business life of this town. The George Weaver House is a favorite because we live in Mr. Weaver’s residence in Bolivar. George Weaver was a civil rights activist, a founder and musical director of his church, a successful businessman, an owner of multiple properties, and a pillar of this community. Also, his son James Weaver, who lived at Stop #20, carved his name into a brick on the side of our home. My husband and I imagine how busy our backyard must have been separated only by a narrow gravel road from this building and the commercial activity that occurred there. It is, I believe, the only commercial building built by an African American in Harpers Ferry, other than the Hilltop Hotel.

What do you want participants to take away from the walking tour?

I want people to have a sense of the truly incredible Black community that struggled but yet thrived here. It is such a small place in area, but here was not only a vibrant college campus, but also spaces dedicated to providing education popping up all over. Here was a flourishing African American business community. African Americans owned so much of the town- beginning right after the Civil War. And here was a community that was service oriented- working hard to build two churches nearly side-by-side. There may be another town that has as incredible a story, but I don’t know of it. I would also like participants to fall in love with this town (or deepen their love for this town) and want to participate in the Foundation’s other projects and events.