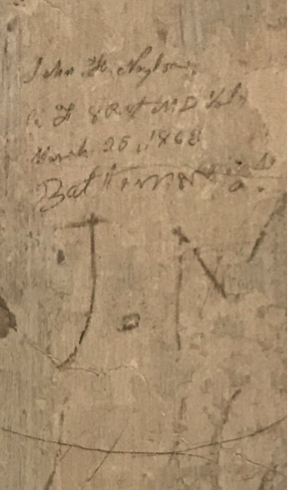 By Bonnie Zampino, Foundation Board Member

In historic Harpers Ferry, there stands an iconic yellow-brick building. Its origins go back to the 1830’s when it was built to house important employees of the US Armory and Arsenal.

During the Civil War, it was occupied by both Union and Confederate soldiers and is a famous backdrop to several photographs taken of the 22nd NY. 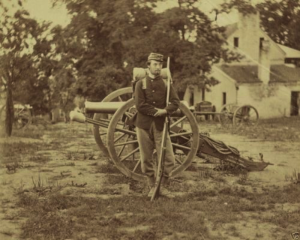 Carved into the plaster walls of the inside of the building are the names and initials of a plethora of soldiers who took the time to leave their literal mark on the landscape that hosted them over the span of five bloody years; the age-old quest to state “I was here” and to ensure that we aren’t forgotten.

One such name was inscribed there on March 25, 1863. That was a Wednesday. Nothing of any great importance happened that day, according to the history books. But at some point, on that date, John H. Naylon (Naylor) entered the brick building on Fillmore Street and told us, 150 years later, that he was in the 8th Regiment MD and was from Baltimore and that he passed through this place on this date. 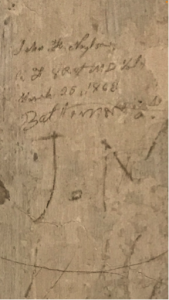 He wanted to be remembered. And now we have the opportunity to do that for him.

John H. Naylon/Naylor was born about 1842 in Maryland. It is unclear who his parents were but it appears that his mother was Evaline Naylor Gibson Tolson. She was married to John Robert Gibson in Philadelphia, PA in 1850 when her son, John, was around eight-years-old.

John may have been 18 at the time he enrolled in the Maryland 8th Regiment, although his muster roll states that he was 22. His Muster out roll, five years later, says he was 22 then too. He was just a quarter of an inch under six feet tall, which was unusual in those days. With blue eyes and a ruddy complexion, he was brought into the Infantry as a 5th Corporal.

He served in the Maryland 8th Regiment Infantry, Company F. That company was assembled in Baltimore, MD and mustered into service in August of 1862. They trained hard under the command of Andrew W. Denison, who had been prominently connected with the “Baltimore City Guard Battalion,” of Baltimore City, prior to the Civil War. 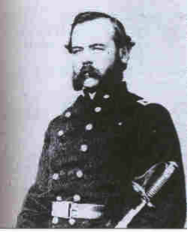 John’s regiment became a part of the famous Maryland Brigade, and it moved to the Antietam Creek near Sharpsburg, Maryland, on September 18, 1862, and was attached to Kenly’s Maryland Brigade, VIII Corps, Middle Department. He defended Williamsport, MD and then, in December, 1862, he was moved to Maryland Heights, the mountain that overlooks Harpers Ferry. His company remained on Maryland Heights until April 9, 1863. During his time on Maryland Heights, he visited Harpers Ferry and, on March 25, scrawled his name in the plaster of one of the few buildings still standing today.

On April 10, he moved to Bolivar Heights and was camped there until April 30. His Regiment moved out and further into West Virginia to hold off the confederate armies of Jones and Imboden.

Records show that he was arrested on July 30 in Baltimore and was sent to Col. Fish. and most likely was sentenced to time at Fort McHenry. He returned to his Regiment and after that, he fought at the Wilderness, Spotsylvannia and ultimately was at the battle of Appomattox and was present when Lee surrendered. He then marched back to Washington, D.C. to participate in the Grand Review on May 23 and mustered out on May 31, 1865. 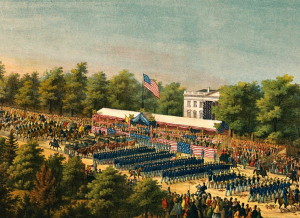 But John’s story is so much more intricate than the facts laid out in the records of the Civil War.

He developed rheumatism and lumbago in his early enlistment and then, in September 1862, he lost his left eye in Harpers Ferry. It is unclear why John would have been in Harpers Ferry at this time. His company was not involved in the Battle of Harpers Ferry. In fact, he marched to Antietam but arrived the day after the battle ended. His Company was deployed to defend Williamsport, MD on September 20-21, 1862 and then were on duty between Williamsport and Hagerstown, MD until December 11. In December, they moved to Maryland Heights and then moved to Bolivar Heights until April 30. After moving further into West Virginia, they returned to Maryland Heights May 26, and were stationed there until June 30 when he moved to Frederick, MD. He came back to Maryland Heights July 7. Did he lose his eye clearing lumber to fortify Maryland Heights? Was he involved in a skirmish with Lee’s troops that were stationed in Charles Town and Martinsburg? We may never know.

After the war ended, John found himself back in Baltimore, working as a plumber. The Gibson side of his family, his Mother’s first husband, were all plumbers. John remained unmarried and on January 16, 1891, he was admitted to the National Soldier’s Home in Hampton, Virginia. He was 49-years-old. 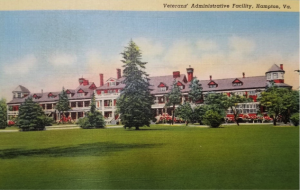 The goal of the National Home for Disabled Volunteer Soldiers was to care for the disabled Union veterans of the Civil War.

When John lived at the Home, he was subject to the Articles of War, which dictated how soldiers should conduct themselves in war. This approach gave the men at the National Homes a structured environment so they knew what to expect on a daily basis.

John would have been part of a company of 150 men, commanded by a captain. Every morning, one captain designated as “Officer of the Day” inspected the buildings and grounds to ensure that all regulations were observed.

John was required to wear a uniform and some of his pension went to pay for that. The United States Army had a surplus of uniforms following the Civil War, so the National Home for Disabled Volunteer Soldiers adopted the uniform of the Army as its uniform. Once the surplus ran out, the National Home for Disabled Volunteer Soldiers continued to have uniforms made. 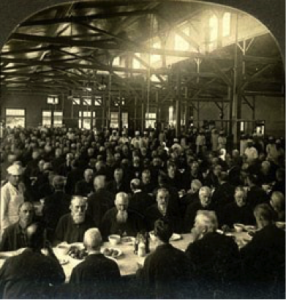 John could be pictured here in this photo of members eating in the Dining Hall at the Central Branch, Dayton, Ohio

The Ohio Home held weekly prayer meetings on Sundays. Most Homes offered both Catholic and Protestant services for the men and had chapels specifically designed to accommodate the two separate congregations.

The National Homes also held daily court to deal with infractions of members who did not follow the rules. Punishments ranged from detention in the guard house to a fine or being deprived of pay for labor. In general, the punishments were applied sparingly; the goal was to provide structure but also support.

John slept in barracks. He had a bed, a chest for his clothes, and a chair. His typical daily schedule was:

Even though John requested to be released on May 16, 1891, by July 1895, he checked himself back into the same home. In November 1896, he again asked to be discharged. 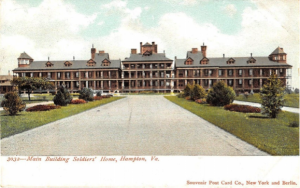 Then, a year later, in November 1897, he again was admitted to a National Soldier’s Home, this time in Dayton, Ohio, where he had to labor for 30 days to pay for his room and board. This time he remained there for a little over a year, leaving in December 1898. 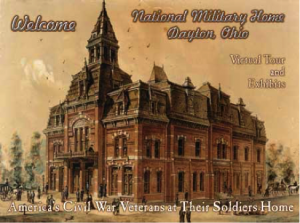 The Baltimore City Directory in 1897 and 1898 shows John living at 314 Lewis and working as a Laborer. 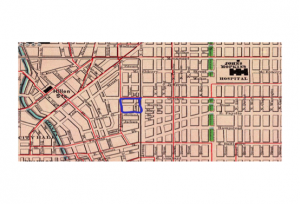 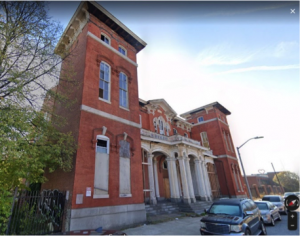 But in less than a month, on January 9, 1900, he again entered a National Soldier’s Home, this time in Washington, Tennessee, where he remained for over four years before again requesting to be discharged. But In 1906 he again was admitted to the Tennessee Soldier’s Home until August of 1914 when he was discharged. 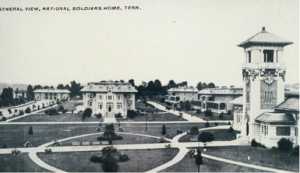 John H. Naylor passed away on November 9, 1914, still living in Johnson City, Tennessee. He was 72 years old and his contributory cause of death was Dropsy which was, most likely, heart disease. He was buried in Oak Hill Cemetery on November 11, 1914.

The facts of John’s personal history leave many questions unanswered. For example, why did he desert, and why did he spend 23 years in and out of soldier’s homes following his service in the Civil War? We will never know; however, John’s simple act of carving his name in wall plaster ensured that his life would lend a human element to the Civil War and its aftermath for generations to come.