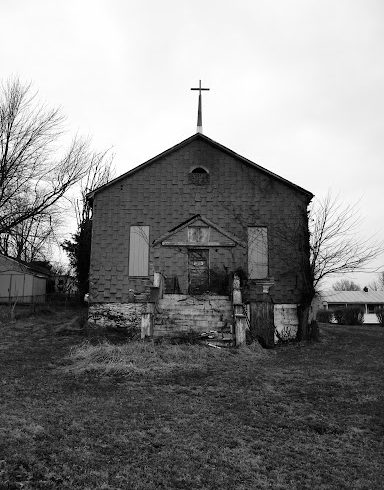 While the iconic St. Peters Roman Catholic Church in Lower Town is surely the most well-known religious building in Harpers Ferry, the most forgotten may be the ramshackle structure at 1060 W. Ridge Street.

The gray-shingled John Wesley Church was once the place of worship for the black Methodist Episcopal congregation, organized as early as 1869. The cornerstone of the church dates its construction to 1879.

Always too small a congregation to support a full-time minister, it was included in “circuit” of two or more regional churches, which varied over the years. In the early 20th century, the Harpers Ferry church had the only parsonage on its circuit, which was located next door at 1050 W. Ridge. One of the ministers who lived there was Rev. Thomas B. Snowden. When he left for a new ministerial appointment, his 9-year-old son John Baptist Snowden (named after his itinerant preacher grandfather) remained to continue his schooling at Storer College. (John’s grandaughter, Nadine, currently resides in Bolivar and is the Historic Town Foundation’s treasurer.)

The church served an important role in the community for nearly a century. Former resident Delores Jackson Foster was a member of nearby First Zion Baptist but remembers joint bonfires with John Wesley Church on Sunday evenings in the mid-century years. A church history written in 1982 mentions family names such as Arter, Willis, Green, and Reeler. The church was known for its outstanding choir, directed for 50 years by James Weaver (who owned the house on the corner of Washington and Boundary Streets). Betty Taylor, who lived on Fillmore Street and was a teacher at the Grand View School, was one of its pianists in the church’s final years.

On September 4, 1977, John Wesley Church merged with Camp Hill Methodist to form Camp Hill-Wesley United Methodist Church. The John Wesley Church property was sold to a private owner, and $12,000 of the proceeds went to an endowment for Cedar Hill Cemetery. (The church had purchased a lot on Old Furnace Road in 1869. This land became the nucleus for the cemetery, which was later expanded and served as a final resting place for church members and other black citizens of the community.)

Several mementos of the John Wesley Church were incorporated into the Camp Hill building and are still there, including the pulpit used by Rev. Thomas Snowden and some memorial windows, pews, and pulpit furniture, as well as a painting of the church by Houston Davis Snowden. 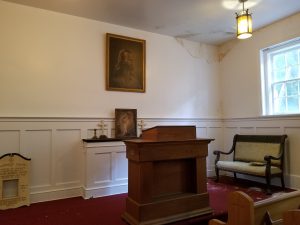