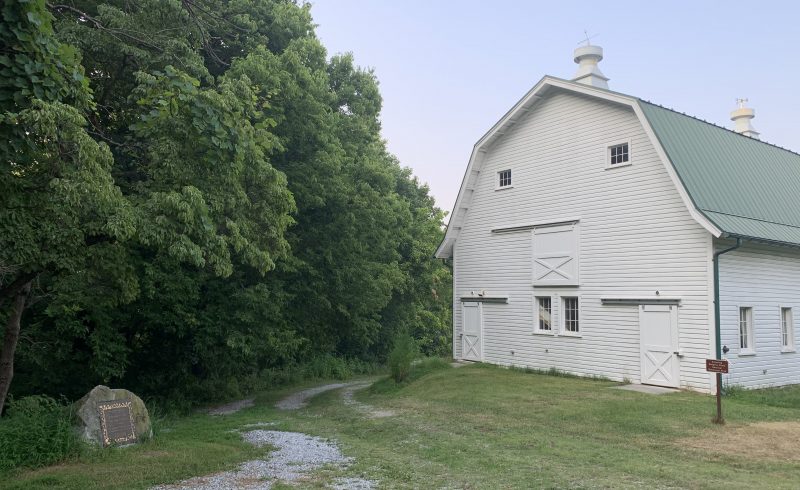 The Bradley D. Nash Farm, commonly referred to as just Nash Farm, is a hidden gem of Harpers Ferry National Historical Park that many people stumble upon unexpectedly. The old farm is located just off of Old Furnace Road in Bolivar and was once owned by Bradley D. Nash who served as the mayor of Harpers Ferry twice – once from 1971 to 1977 and from 1981 to 1987. The property offers beautiful views of the Potomac River and mountains from the expansive field, interesting trails and as many wineberries as you can eat!

Before the Civil War, the property, along with much of Harpers Ferry, belonged to the U.S. Government who operated the arsenal and musket factory. In 1851, the town of Harpers Ferry, VA, was incorporated and the U.S. Government began selling parcels of land shortly thereafter. During the Civil War, the then-undeveloped wooded land likely provided shelter and fresh water from its spring for Union troops. Following the Civil War, the parcels of land that now make up Nash Farm changed hands a few times. The land supported a brewery and dairy farm, though at different times, before Bradley D. Nash and his wife, famed war correspondent Ruth Cowan Nash, purchased part of the property in 1951. Some of the original structures remain.

Nash spent much of his career in Washington, D.C., holding a number of powerful positions to include Deputy Assistant Secretary of the Air Force and Deputy Undersecretary of Commerce under President Eisenhower. He developed influential contacts, including Sen. Jennings Randolph, which he leveraged in support of the National Park Service program in Harpers Ferry, a cause for which he was passionate. In 1990 and 1991 Bradley and Ruth Nash donated their land to the National Park Service where it now serves as a charming oasis for residents and visitors alike!

Is It Spring Yet?