Recollections of Growing Up in Harpers Ferry

Home » Blog » Recollections of Growing Up in Harpers Ferry 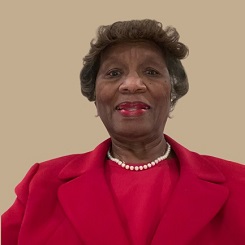 Ms. Jackson Foster is a Foundation board member and native of Harpers Ferry. After graduating from Shepherd College (now Shepherd University), she taught at her former high school, Page-Jackson High School in Charles Town.   She moved to New Jersey and, after 40 years, retired as an Elementary School Principal.   In 2014 she moved back to Harpers Ferry and spends her time as a volunteer for community agencies. She is a proud member of the Eastern Panhandle Alumnae Chapter of Delta Sigma Theta Sorority, a community service organization.

I came from a large family—8 sisters and 4 brothers. I am the third of 11 born to Daniel D. Jackson and Mary Frances Taylor Jackson. My half-brother was 10 years old when my parents married.   I remember his coming home to visit us after he joined the Army. I was 8 years old when he came back from WWII to live with us again.

Even though we were a large family, our basic needs of food, clothing and shelter were provided by a father who worked hard on the B&O Railroad, stone quarry and apple orchard. My father and mother taught us what being a family meant.   We were taught to love one another and to take care of one another.   We were made to feel responsible for what one another did. This can be looked to be good or bad. If one of us was punished for doing something wrong, another sibling who was with us was punished also. We were taught that the name of Jackson meant something and we were not to do anything to bring shame on the name. All of our friends loved being at our house.   My mother was a good cook and a very generous person.   Our friends ate at our house when we sat down to eat.   There were times that I wished the friends would go home and leave more food for us.

My parents’ house was where my mother’s siblings, as well as her father, visited when they came to town.   My grandfather lived in Bolivar and visited us everyday.   We looked forward to his being at our house when we returned from school.

Race relations in the communities of Harpers Ferry and Bolivar were good in the sense that we could live on any street.   Both races got along very well. However, the largest Black community surrounded West Ridge Street in Harpers Ferry and Union Street in Bolivar.

The outstanding attributes of the Jackson Family were generosity and success.   We were taught to share with one another and others.   My mother was a community-minded mother. She took us to events in the town. I remember my mother being called on for comments when we attended civic and church events.   Perhaps, this is where I inherited my love for community and give of myself for others.   Seven of us graduated college and two others graduated from a two-year college. Education was a value that was instilled in us by our parents.   My mother told us that we must get at least a college education, since she had to quit school after her mother was killed in a buggy accident to care for her younger siblings. My father had only a 3rd grade education, and taught us that no one could take education from us.

When we became school age, we were required to attend Sunday school at First Zion Baptist Sunday school and worship service. We were not given another choice.   My father was 1st deacon and my mother a deaconess in her home church, Mt. Moriah Baptist in Halltown, WV. It was at First Zion that I learned public speaking.   We were given “pieces” to recite on the Easter and Christmas programs.   During penny circle, which was an evening after-church activity, we were taught public speaking. We were assigned topics and were expected to speak on them. It was at First Zion that we spent our summer vacations from school.   We were taught about God. Catholic university in Washington, D.C. sent the brothers to Harpers Ferry to teach us the Catechism.   We were Baptist, but that didn’t matter.   When we reached the age of 12 and during the month of August, we were baptized in the run at Halltown paper mill by the pastor of First Zion Church, Rev. Thomas Jackson.

The students at Storer College were our mentors.   They attended church with us and planned activities on campus for us. We had weekly sock hops on Friday. We attended their basketball games in their gym and had Easter egg hunts and Christmas parties organized by the students. My two older sisters had attended Storer College, the college I had planned to attend, but because of the Supreme Court decision of 1954 (Brown v. Board of Education), the State of WV pulled its financial support for Storer and it had to close. We had no other choice but to attend Shepherd College (University) in 1955.   We were the second wave of the 25 Black students to go to Shepherd. We were coached by our parents how to react when the students called us the “n-word” and told us to go back to our own school. Despite mistreatment by some white students, we continued to attend Shepherd. We paved the way for other Black students to attend Shepherd. Four of my family are graduates of Shepherd University; one other sibling attended but left to attend a nursing school in Baltimore, MD.

The educational system didn’t change for all Black children until 1965, the year all schools were integrated in Jefferson County. When I think of Black History, I recall how our teachers instilled self-pride, as well as our parents.   Our teachers, some who had graduated from Storer College, told us about the courage of John Brown to want to free slaves and the Black men who died with him. They told us that we needed to give back to the community and that we had to be twice as good as white people to be successful. History was made when we successfully completed elementary school, graduated high school and college.

I have achieved a great deal in life. I graduated from Shepherd College (University) with a degree in business education and English.   I moved to NJ where I retired as an elementary school principal. We want our future generations to know about the history of our family. We will hold our 48th Jackson Family of Harpers Ferry family reunion on July 7-10 in Atlanta, Georgia. At each reunion we have a family night where our Jackson Family history is presented visually and orally. We have a scrapbook that tells about annual family reunions from 1975 to the present. We have a program where we honor recent graduates from elementary school, high school, college, and postgraduates. Graduates from high school, college and postgraduates receive an honorarium for their achievements. We award an annual $500.00 academic scholarship and it’s renewable if a descendant achieves a B average. These incentives are our way of ensuring Black excellence.